February marks the Super Bowl, one of the most-watched sporting events celebrated in living rooms and on Twitter. Fans know that even if the game is a blowout, the halftime show and ads will keep them entertained. This year a deep dive into the data looked at Super Bowl tweets to discover commercial winners and provide some surprising lessons for advertisers.

.@theweeknd talks with @heykayadams about what it means to perform on “the biggest stage there is” at the #PepsiHalftime show! (via @nflnetwork)

Since 2002, Super Bowl ad spend has gone from $2.2 million on average to $5.6 million for a 30-second ad with a total of 80 to 100 commercials during the four-hour game. Touchdowns and trophies make it easy for football players and franchise owners to declare a winner. But, how do advertisers measure their success?

Enter the Game Day Ad Analytics Challenge. In 2018, Chong Oh, Director of the Undergraduate IS Program at the University of Utah, found a way to bring student learning and real-world data analysis together through a contest of wits.

The annual Game Day Challenge requires student teams to present infographics and white papers based on Twitter activity from Super Bowl commercials. Roughly one million tweets are extracted from Twitter, then analyzed to measure audience reach, fan engagement, performance, influence, and overall buzz. Students apply technologies including PHP, Python, R, MYSQL to the Twitter API in their data visualizations and analysis, and then present their findings to a panel of industry experts. 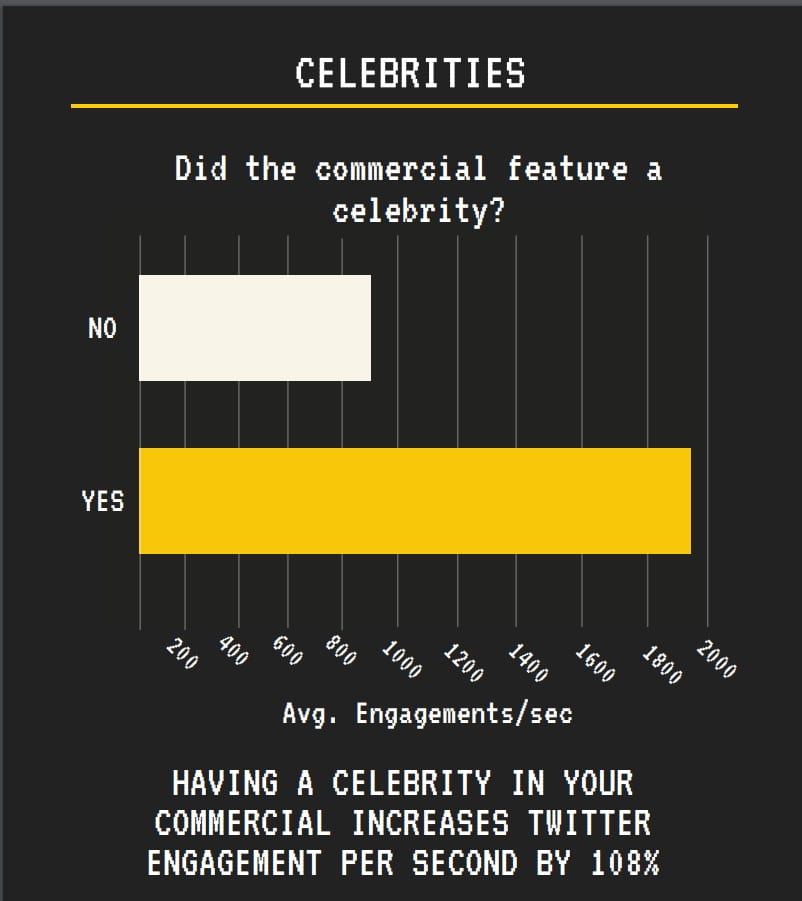 The competition is organized by Utah’s Eccles School of Business in partnership with local sponsors. Video conferencing, added for 2021, allows teams and judges to meet virtually. Competing undergrad and graduate student teams hail from area universities including BYU, UVU, and the University of Utah, as well as out out-of-state schools like Howard University. Sponsors for 2021, who provide judges, cash prizes, and coveted internships are national construction powerhouse, Layton Construction, and a trifecta of creative media and digital ad agency prowess with Thomas Arts, Molio, and our own Firetoss. 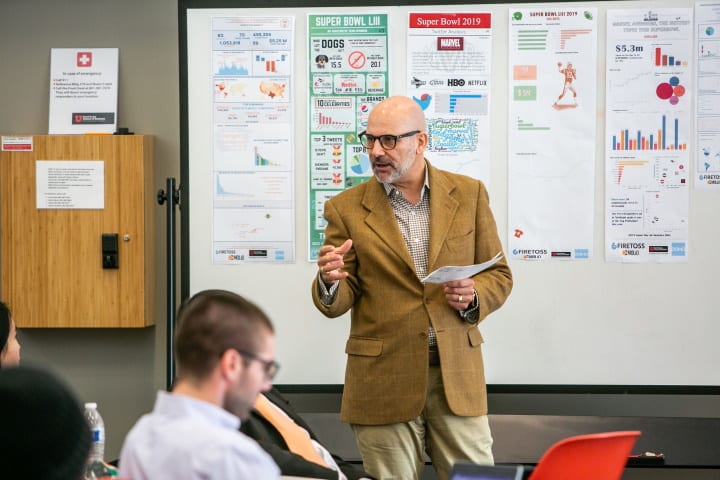 This year students leveraged prior year data analysis to bring the “highest quality of student data presentations we have seen. The quality and level of understanding to digest complexities, present and make recommendations from the data is outstanding.” according to Jeff Davis, Founder & Chairman, Molio Inc.

Tom Brady led the Tampa Bay Buccaneers to win the Vince Lombardi Trophy in 2021 and beat Kansas City. Advertisers vied for the real prize – fan engagement. According to Statista, Super Bowl LV ads sold for around $5.5 million per 30-second ad, down a bit from $5.6 million in 2020, but still bringing in over $450 million during the game.

The Game Day Analytics teams used varying metrics to quantify fan engagement across 1.3 million tweets and thousands of likes and comments. For some, it was the sum of tweets, retweets, likes, and comments that signaled winners. Others, including the 2nd place Undergraduate team from Howard University, created a unique weighted metric, with the theory that comments and original tweets require greater effort, and should count more than a simple like. Across the board, dozens of students concurred around five commercial brand winners. 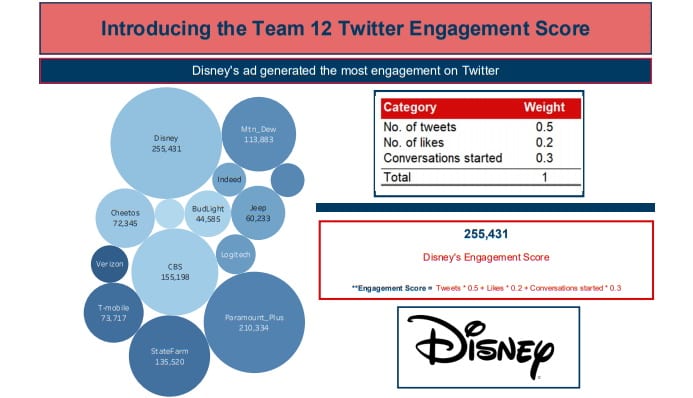 Data used in the Game Day Ad Analytics contest was limited to the four-hour Super Bowl game time, but T-Mobile got a jump on the rest by previewing this ad that was banned from airing during the big game. The official airing of their #Rockstar ad, featuring Gwen Stefani, Adam Levine, and Blake Shelton caused a second wave of buzz bringing in over 278,000 tweets during the game.

This ad will not air on Sunday.

What snack-lover hasn’t resorted to stealing their spouse’s or roommate’s stash of cheesy goodness? Ashton Kutcher and Mila Kunis make this song by Shaggy one to remember to the tune of 316,000 tweets and retweets.

It’s been 21 years since ‘It Wasn’t Me’ came out, and it’s still the perfect response to getting caught…@Cheetos #ItWasntMe #SBLV #Ad pic.twitter.com/KdkgI7KRUa

If the Super Bowl is the king of sports events, CBS has the Queen of entertainment with Queen Latifah. The promos for CBS’ 1980’s reboot of “The Equalizer” garnered 547,000 tweets and retweets.

Here comes the Queen. Catch #TheEqualizer series premiere tonight after the Super Bowl on @CBS and CBS All Access. pic.twitter.com/MBLmIdTIJC

State Farm used a star-studded lineup to make insurance interesting. Patrick Mahomes, Aaron Rodgers, and Paul Rudd joined Drake. Fans got to vote for who said it best, with 611,000 tweets and likes, for Drake or Jake from State Farm.

Entertainment ads are Super Bowl fan favorites, and the Disney-owned Marvel franchise delivered in 2021. “The Falcon and the Winter Soldier” smashed records for trailer views and earned the Super Bowl LV ad title with over 1.14 million tweets, retweets, likes and comments.

Are you ready? Watch the brand new trailer for Marvel Studios’ “The Falcon and The Winter Soldier” and start streaming the Original Series March 19 on @DisneyPlus. #FalconAndWinterSoldier pic.twitter.com/1gayqezFFD

If featuring a celebrity in your commercial is the go-to play for Twitter engagement, having your celebrity tweet during the Super Bowl about your ad, earns the extra point. This single tweet from Posty saw nearly 35,000 comments and likes.

we had fun making this. love all my #budlightlegends @budlight 🙂 pic.twitter.com/AbvmDYTpXS

The student teams had only a few days to process millions of data points and conclude their findings. They answered tough questions in creative ways both visually and in writing. What brands yielded the greatest engagement? What quarter of the game should a company run its ad to maximize ROI? What types of industries should run ads? And when the clock is up, how did brands score?

Start with a strong social media following, in this case, Twitter. And with that, know your demographics. IT’s NO surprise texas loves football, but did you know they love twitter?

If you’re in the entertainment or food industries you have home-field advantage, since these industries naturally lend themselves to social chatter.

Place your ad before HALFTIME to maximize viewership and tweet longevity. viewership for run away games can drop by 50% in the second half. 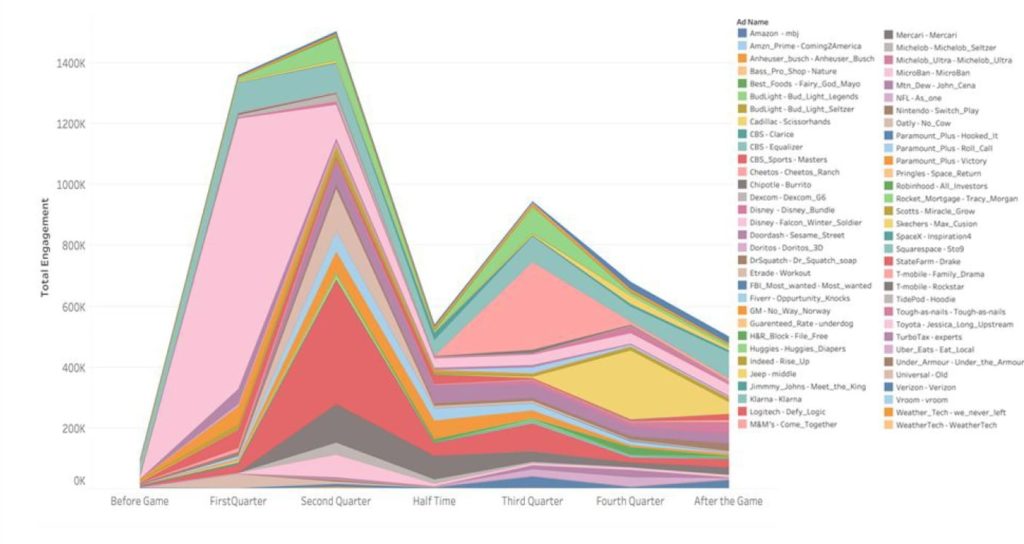 Download the white paper using the link below to find out which brand paid $11M for a single tweet. (Ouch!) 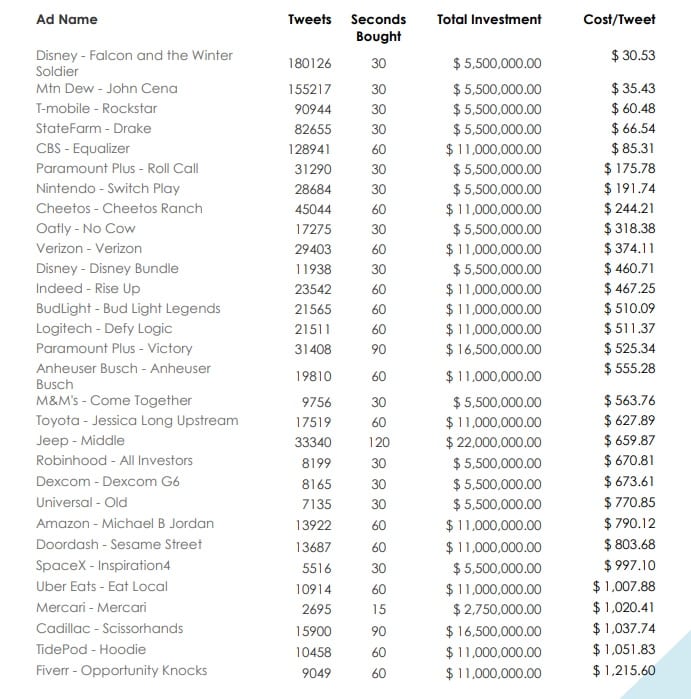 Include a celebrity, or two or three, and be sure they’re tweeting during the game. 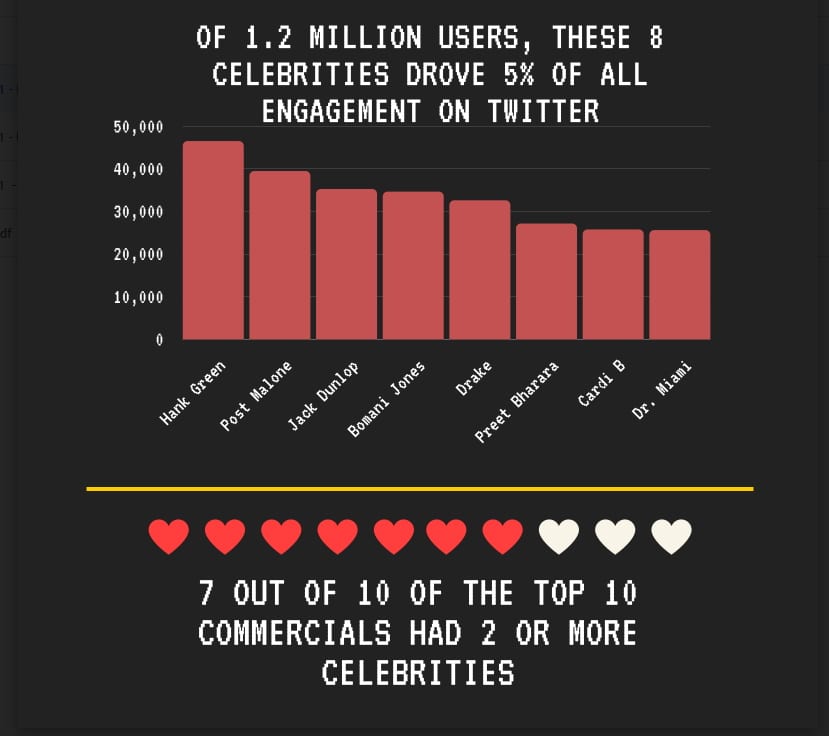 Congratulations to all the students who met the Game Day Ad Analytics Challenge. The level of talent and creativity gets better every year as teams build off the lessons of previous teams. And to you advertisers, we hope you’re listening and can’t wait until next year. 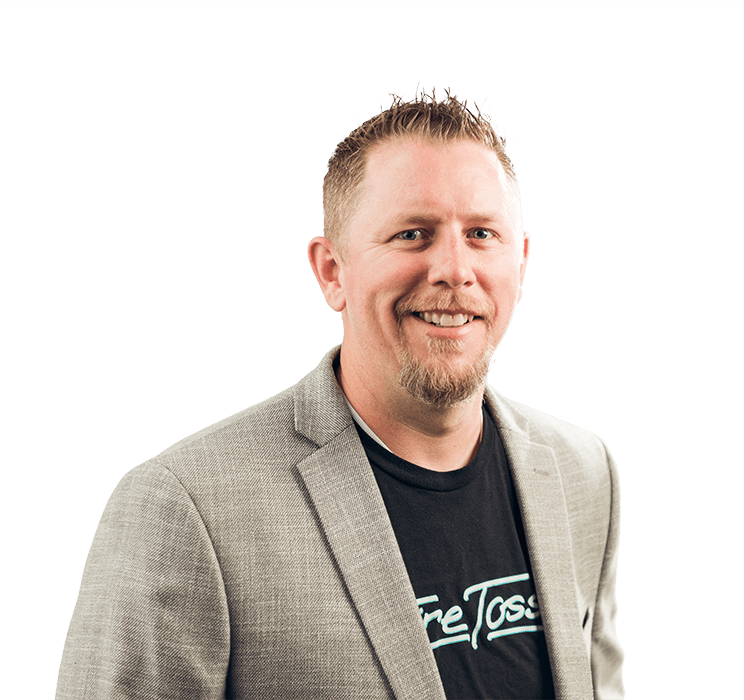 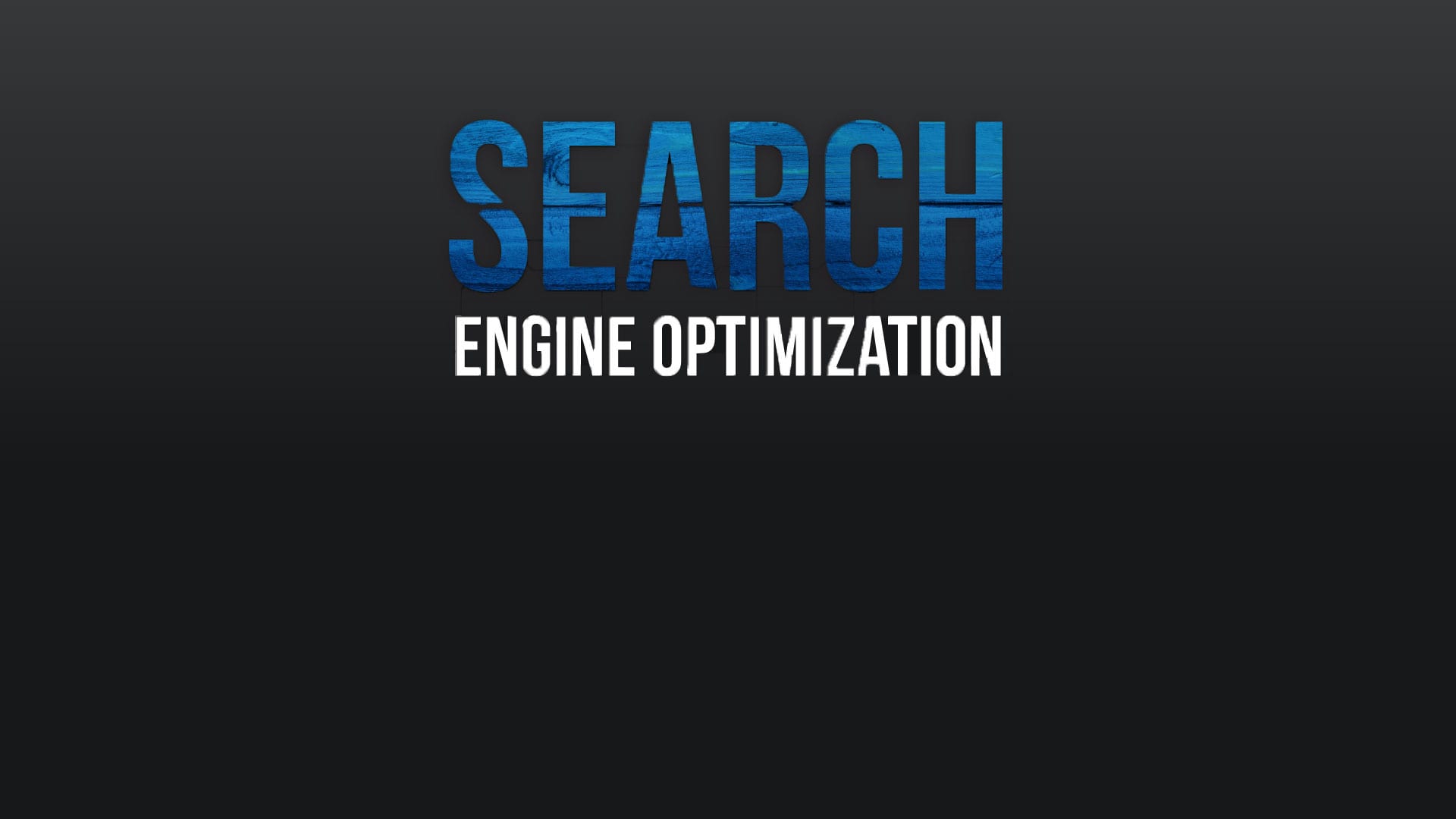 SEO stands for Search Engine Optimization. SEO is the process of increasing your... 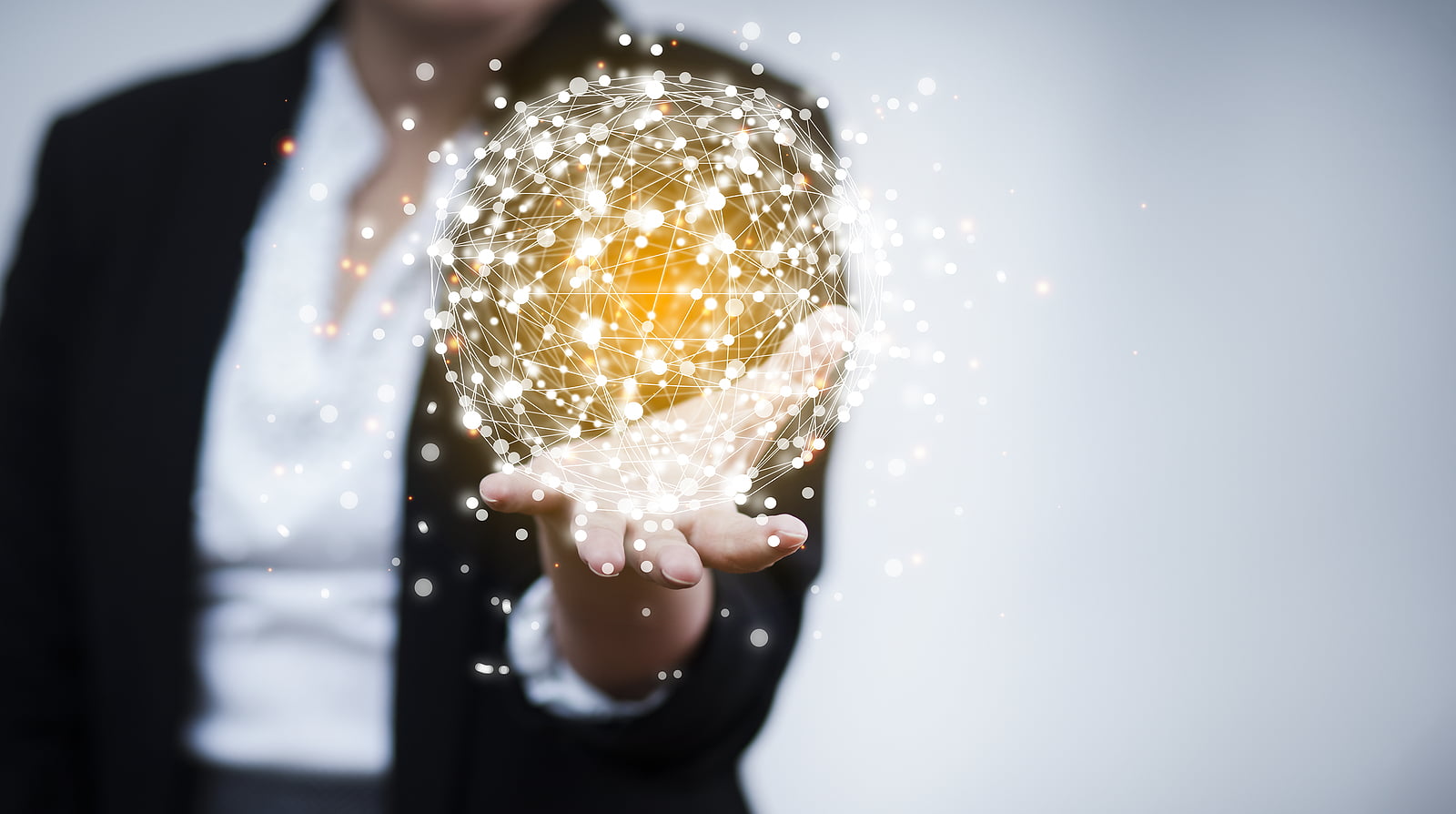 Episode 004: Networking in a Post-Covid World 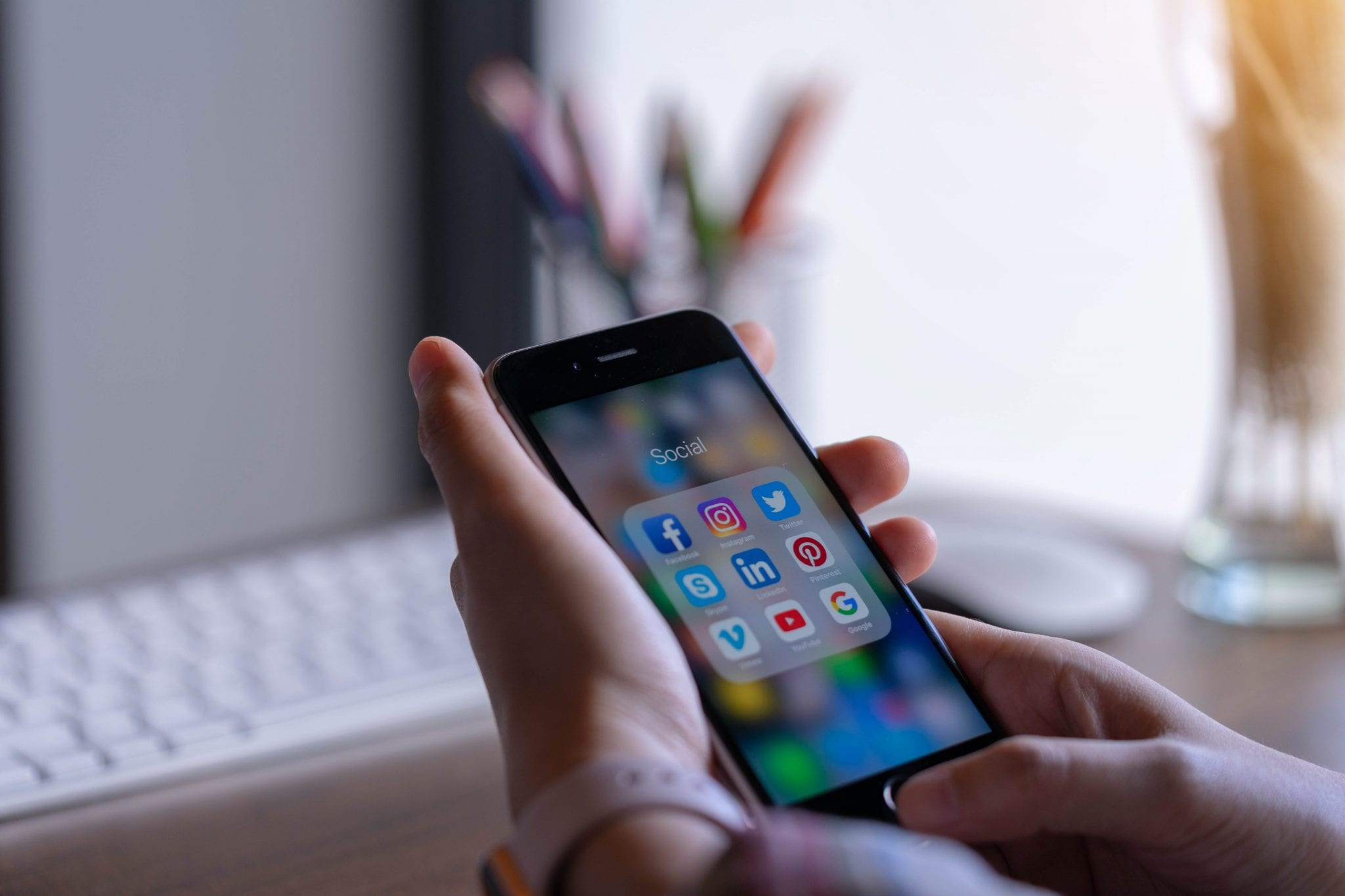 The introduction of smartphones greatly impacted the world in which we live. Tod...